Showing posts from November, 2017
Show all

The Delicious Desserts of Mexicali Blues 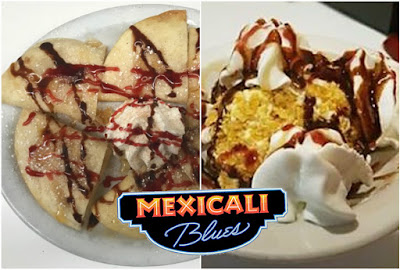 Even if you have dined at our Lake of the Ozarks Mexican restaurant many times, there is a very good chance that you filled up on your delicious dinner and didn't have room for dessert. Big mistake! (Well, not necessarily a mistake, but you're really missing out on something special.) Mexicali Blues has two amazing desserts to choose from - sopapillas and fried ice cream.


SOPAPILLAS
A sopapilla is a deep-fried pastry most often served as a dessert covered in powdered sugar and honey or syrup, and sometimes coated with cinnamon and sugar. They even taste wonderful with a scoop of ice cream on top!

The sopapilla has become a staple in Mexican restaurants worldwide, but while it is considered a Mexican dish, it was actually first created in the United States. It is believed that the first sopapilla was created over 200 years ago in New Mexico. This dish became extremely popular across South America too. Latin American sopapillas are generally more tortilla-like, while the New Mex…
Post a Comment
Location: 6605 US-54, Osage Beach, MO 65065, USA
Read more 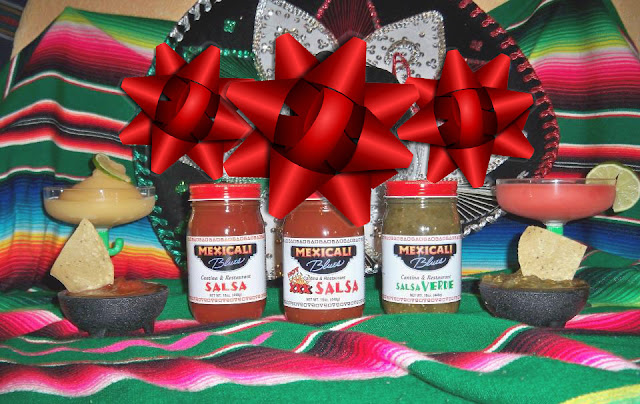 It's that time of year again when you have to start looking for the perfect present for everyone on your "nice" list. It can be difficult finding something you know the recipient is going to love and actually get some use out of. To help you with that search for a great gift, Mexicali Blues has a few fun ideas for you.

A Gift Basket
You know how much you love the taste of our Lake of the Ozarks Mexican restaurant's all natural salsa full of fresh ingredients. Why not share a jar of that savory sauce with everyone else? You can buy jars of our premium salsa here at the restaurant, and you can also find it on the shelves at many grocery stores in Missouri. It is available as Original Salsa, Salsa Verde, and XXX Salsa (XXX-tra hot!) Pick up a bottle (or 2 or 3,) add a bag of tortilla chips, and put that all in a basket or gift bag with a bow. Now you have a beautiful... and delicious... gift everyone would love to receive.

7 Fun Facts About Our Favorite Cocktail- The Margarita! 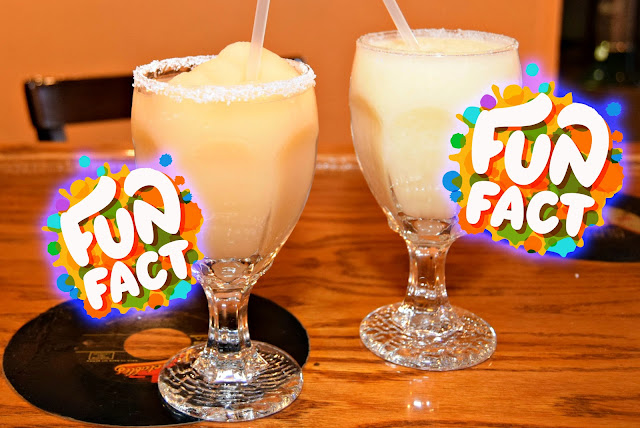 When you are thirsty for the best margaritas at the Lake of the Ozarks, your search is bound to lead you to Mexicali Blues in Osage Beach! Not only will you find the most amazing classic margarita you've ever tasted, but we've also got a big menu full of different versions of this delicious drink to tempt your taste buds with.

Since everyone seems to have so much fun when they visit our Lake of the Ozarks Mexican restaurant and share a margarita or two with friends, today we've come up with 7 margarita fun facts for you to enjoy. The next time you join the gang for cocktails, you can impress them with your new knowledge!

Stories vary when it comes to the creator of the first margarita, but two of those tales involve the cocktail being named after a girl; an American socialite, Margarita Sames, or a showgirl in Tijuana, Marjorie King. (Margarita is a Spanish version of the name Margaret, which Marjorie derives from.)In 1945 the first importer of Jose Cuervo to the United St…
Post a Comment
Location: 6605 US-54, Osage Beach, MO 65065, USA
Read more

Get Ready For Fiesta Fridays! 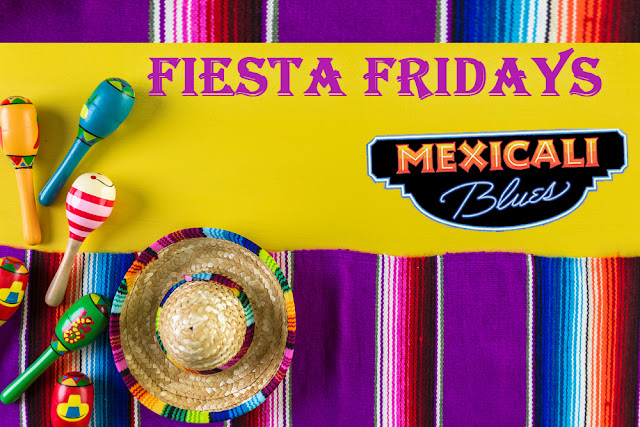 
Chicken Fajitas
Every Friday night, from 4-10 pm, we are offering our mouthwatering Chicken Fajitas for ONLY $9! You'll enjoy savory grilled chicken on a bed of onions and peppers, and it is served with all the fixings so that you can build your own perfect fajita: rice, beans, lettuce, cheese, sour cream, tomatoes, and flour tortillas. Normally this delicious dish costs $13.50, so you've got more than enough left over to indulge in our next Fiesta Friday special.

Marvelous Margaritas
We have a drink menu filled with the best margaritas at the Lake of the Ozarks, but our House Margarita seems to be the most popular choice. This tasty cocktail makes our already-amazing Mexican food tas…
Post a Comment
Location: 6605 US-54, Osage Beach, MO 65065, USA
Read more

Where Did The Chimichanga Come From? 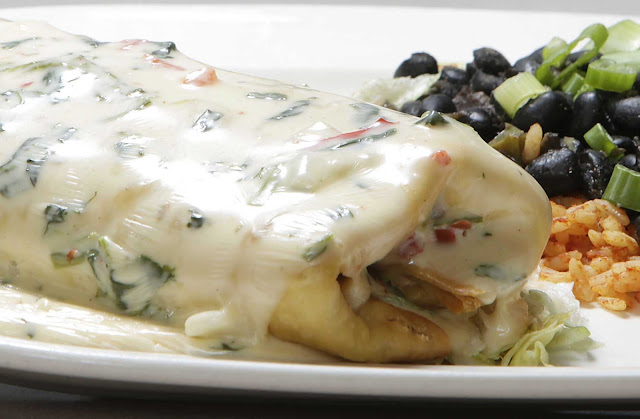 A very popular dish at our Lake of the Ozarks Mexican restaurant is the Chimichanga. We have two delicious versions of this tasty treat available for you to order at Mexicali Blues, but did you ever wonder how this yummy dish came to be? Well, wonder no longer, because we found out for you! (Kind of...)


The Chimichanga's Possible Origins
Apparently, there are a couple of different stories about how the chimichanga became a beloved dish. The first possibility claims that the founder of Tucson, Arizona's El Charro restaurant, Monica Flin, dropped a burrito into the deep-fryer by accident back in 1922. This made her start to curse with a Spanish word that begins with "chi..." but she quickly censored herself and instead said, "chimichanga!" which is similar to the American word "thingamajig" in Spanish.

Another tale goes that Woody Johnson claims to have created the first chimichanga in 1946 as an experiment for his restaurant, Woody's El Nido. T…
Post a Comment
Location: 6605 US-54, Osage Beach, MO 65065, USA
Read more
More posts

The Wait is Over - Mexicali Blues is Back! 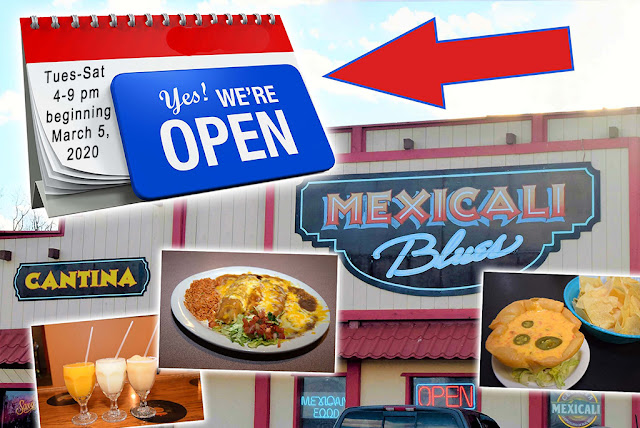 The wait is finally over and your favorite Mexican restaurant at the Lake of the Ozarks is back! We will be open for the 2020 season beginning on Thursday, March 5 at 4:00 pm. The hours have changed slightly but all of those fantastic flavors you love from Mexicali Blues in Osage Beach are back and every bit as delicious as ever.


New Hours
You can still enjoy the best Mexican food at the Lake of the Ozarks every Tuesday-Saturday this year (including $1 tacos every Taco Tuesday.) Instead of opening for lunch, though, we will now be open from 4:00-9:00 pm each of those days.

Fresh, Homemade Mexican Food
Those of you that have been here before already know, but for any new diners that still need to stop by and check us out, here's what you can expect. We always use the freshest and most savory ingredients in everything that comes out of our kitchen.

In addition to the finest Mexican cuisine in the Midwest, we also offer a few American-style dishes as well that are equally delicious. S…
Read more 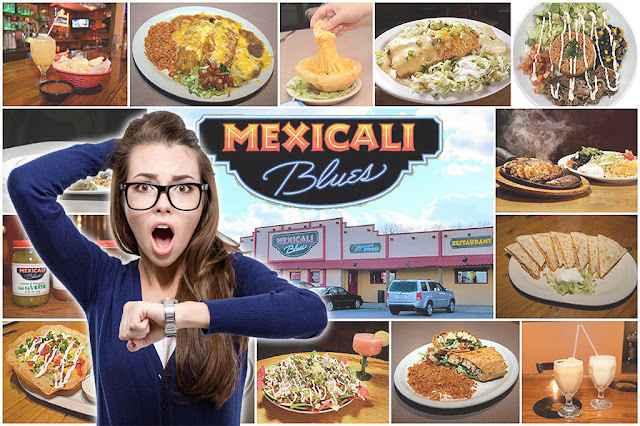 Mexican For Dinner at Your Place or Ours! 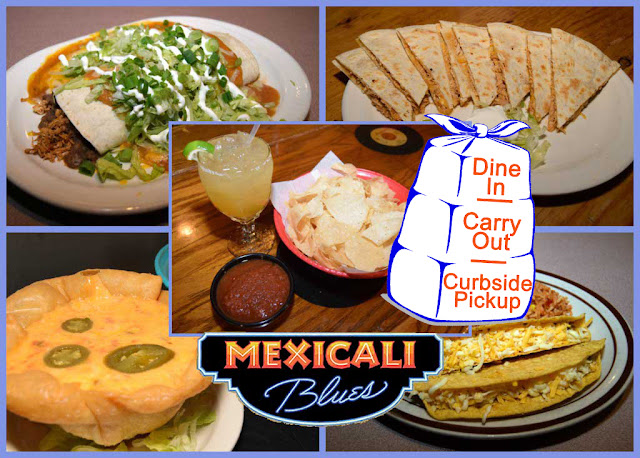 Most people are staying home right now and avoiding contact with others as much as possible. (As we all should be!) You're still going to get hungry though and you're very likely going to be craving Mexicali Blues. That's not a problem at all because currently, the best Mexican food at the Lake of the Ozarks is still being served here Tuesday-Saturday from 4:00-9:00 pm!

Dining In
At the time this is being written, restaurants in our area have not been asked to shut down their dining rooms. If you are able to join us in-house for dinner, come on over! Our employees always practice cleanliness and good hygiene and right now, we're being even more conscious of that than ever.

There is also plenty of room at our Lake of the Ozarks Mexican restaurant to space out the tables so that social distancing can be enforced. If you feel up to it and need to get out of the house, we'll be here for you while we still can. Of course, if you'd prefer to eat at home, order Mexical…
Read more